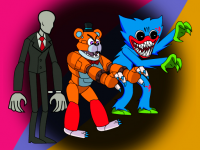 Monsters Attack Impostor Squad is a fun horror-themed action game where you have to control Slenderman, Huggy Wuggy, and Freddy so they can all stay alive.

Monsters Attack: Impostor Squad is a survival game with Fredy, Huggy Wuggy, and Slenderman as well-known cartoon characters. To survive, you must fight against your enemies. More and more monsters are coming out of the shadows and becoming a threat to people. Even though the government has tried new ways to get rid of these monsters, nothing has really worked. Up to now. An elite group of soldiers has just been sent in to solve the problem. This meant that they would have to talk to the monsters almost every day.
The "squid games" will be used as a model for the "Monsters Attack Impostor Squad" game. The prisoners will be well-known cartoon characters. You have to choose your favorite character and fight the boss monsters to help them get away.
Different characters can beat their enemies and stay alive by using their own unique skills. You need to figure out the best way to beat every dangerous character that comes your way. Don't stay far away from them, and shoot accurately to kill anyone who tries to get close. In this game, the main goal is to stay alive.

You have to be in charge of the three characters if you want to make it through each level and win. Each level gets harder than the one before it. You will face three dangerous monsters that will do everything they can to kill you. Action, shooting, and fighting are all parts of it. The fight between real monsters and fake ones Strategy and the control of resources