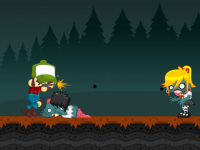 Walking Monsters is an interesting shooting game featuring with the zombie theme where you have to escape from all of them and save yourself!

Everybody loves zombies. But everyone else also wants to fight them. In the game, you play as a farmer who is being chased by zombies. Zombies were all around your farm and you. And you have to run and attack every zombie you see. But not just zombies! You also have to attack the monsters in the air before they get to you.

To fight against a zombie, you have to shoot at it five times. Two shots will kill an apple, and three shots will attack a bat.

Click on the play button to start the game. All you need to do is shoot zombies and monsters with your gun. Use your mouse to aim and shoot. You only have three lives. You lose one life when a monster becomes a character. You can attack as many monsters before you die to increase your high score.