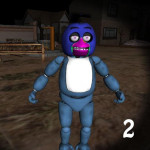 FNAF: Two Nights at Jumpscare Creation takes us back into the world of creepy creatures, where your sole goal is to survive two nights in a row! Over the course of these nights, you are required to collect smartphones within the time limit given. The first task is to collect a total of 29 smartphones within ten minutes. Apart from collecting, you must also avoid being captured by the evil animatronics and monsters. The game will restart if they catch you.

During Two Nights at Jumpscare, you'll be in an old huge mansion, and you've got to figure out every clue by visiting each room, observing to get the smartphones. Move around with the WASD keys, and click on the on-screen cursor to interact with items. You must move quickly through the dark stage, keeping all your senses alert and avoiding being scared if you do not want to lose. Put on the headphones, turn out the lights, and you'll be frightened. Have fun!

There are a lot of jumpscares
The enemy AI can trap you if you're not careful
A cool sound effect that you can enjoy when you wear headphones
At the end of the quest, there is an epic boss battle