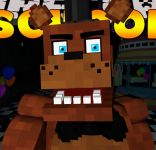 Five Nights in Minecraft is a fantastic video game inspired on the popular survival horror title Five Nights at Freddy's. The objective of the game is to make it through five consecutive nights spent within a restaurant without being attacked.

The trial version of Five Nights in Minecraft does not do justice to the huge amount of content that is presently being reanimated and developed for the game. Because Freddy's environment is constructed out of blocks, you will need to do all in your power to endure the five nights spent at the diner.

The first time a victim meets Freddy, it will almost always be their last. At Freddy Fazbear's Pizza, the young patrons are kept entertained by Freddy, an animatronic robot. During his search for you, Freddy will have some of them accompany him while he looks for you.