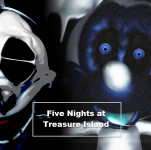 In the new FNAF game Five Nights at Treasure Island, which is based on the Abandoned and Five Nights at Freddy's series, you must maintain survival throughout the night.

The Radiance Team created a remake of AnArt1996's original game. In addition, Creepypasta: Abandoned by Disney by Slimebeast provided as inspiration. In a reworked version of Friday Night Funkin, Boyfriend got a job offer from the now-defunct Disney resort Treasure Island. However, he is not the only one.

Greetings, Jake Smith here. You joined the SSA through a training program as a university student. You are impoverished, which is the major cause of this. You've been assigned a peculiar task by the SSA to acquire information: explore the derelict Disney resort Treasure Island. The tragedies and evil secrets that the island conceals might not be known to you.

If you haven't played the original game, try the tutorial. The mechanics will be difficult to comprehend otherwise.